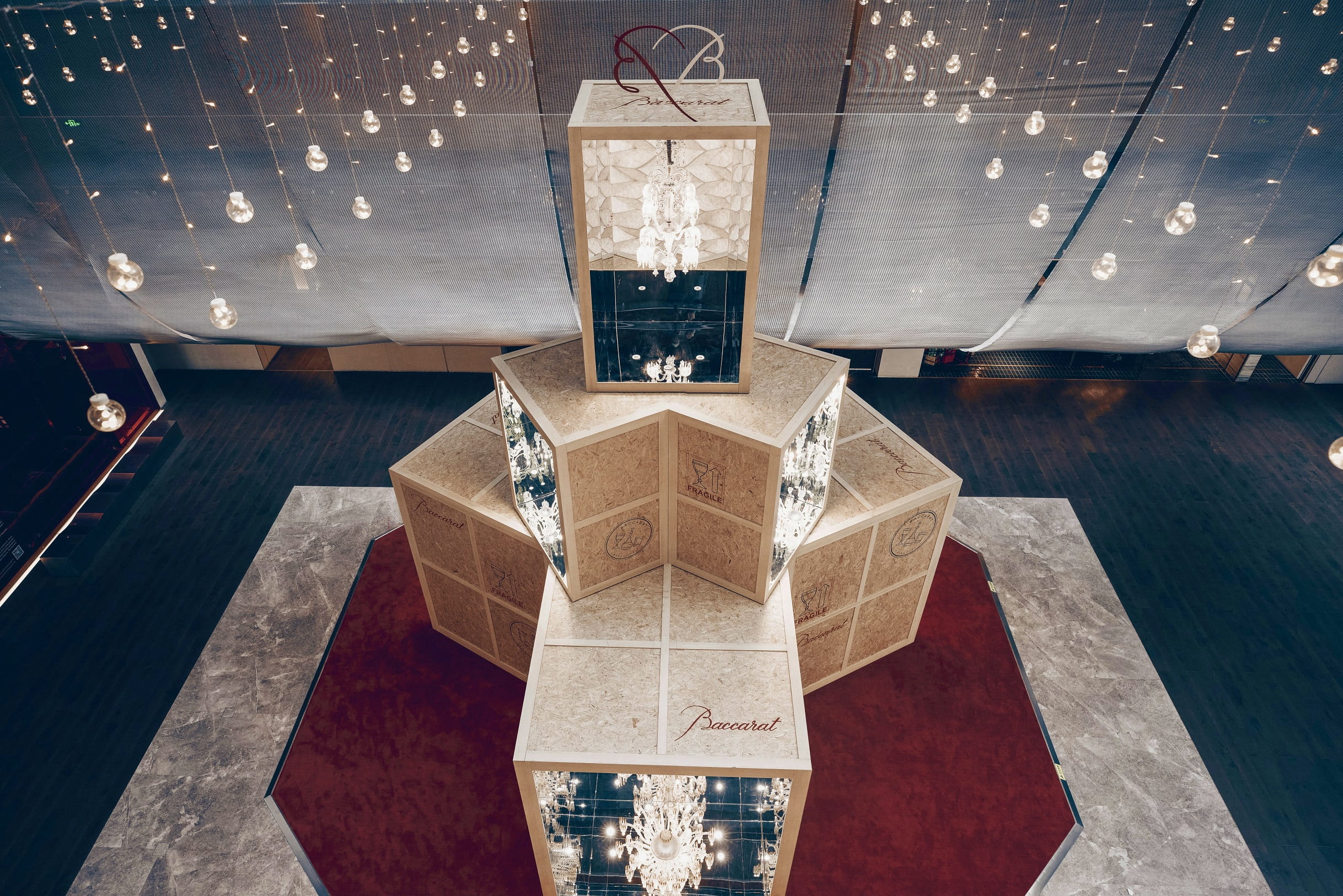 With the festive season approaching, it's time to add some sparkle to your winter evenings. The House Collective has teamed up with one of France's most established artisans of crystal glassware, Baccarat, to launch an exclusive collaboration. In conjunction with the Baccarat's Harcourt Collection 180th Anniversary,The Opposite House in Beijing, The Middle House in Shanghai, The Temple House in Chengdu and The Upper House in Hong Kong have created a series of exciting festive surprises centered around Baccarat’s famed crystal.

Baccarat brings one of the most iconic chandelier styles of the House - The Zenith to Atrium this Christmas. The Zenith chandelier was created by Baccarat in the 1840s and since then has been ordered by the greats of the world looking for bespoke, stunning lighting pieces to decorate their sumptuous palaces.

To add some extra glow to your evening, mixologists from all four Houses have created three limited champagne cocktails, each served in its own Baccarat crystal glass. Union is also serving the “Harcourt 180” cocktail. Presented in a Harcourt1841 glass, the Harcourt 180 is currently being served at the Baccarat Maison in Paris to celebrate the 180th anniversary of the famed crystal glassware collection. Union Operation Manager Harry Zhang also contributed his creativity in designing three champagne based cocktails for you to start a sparkling night. 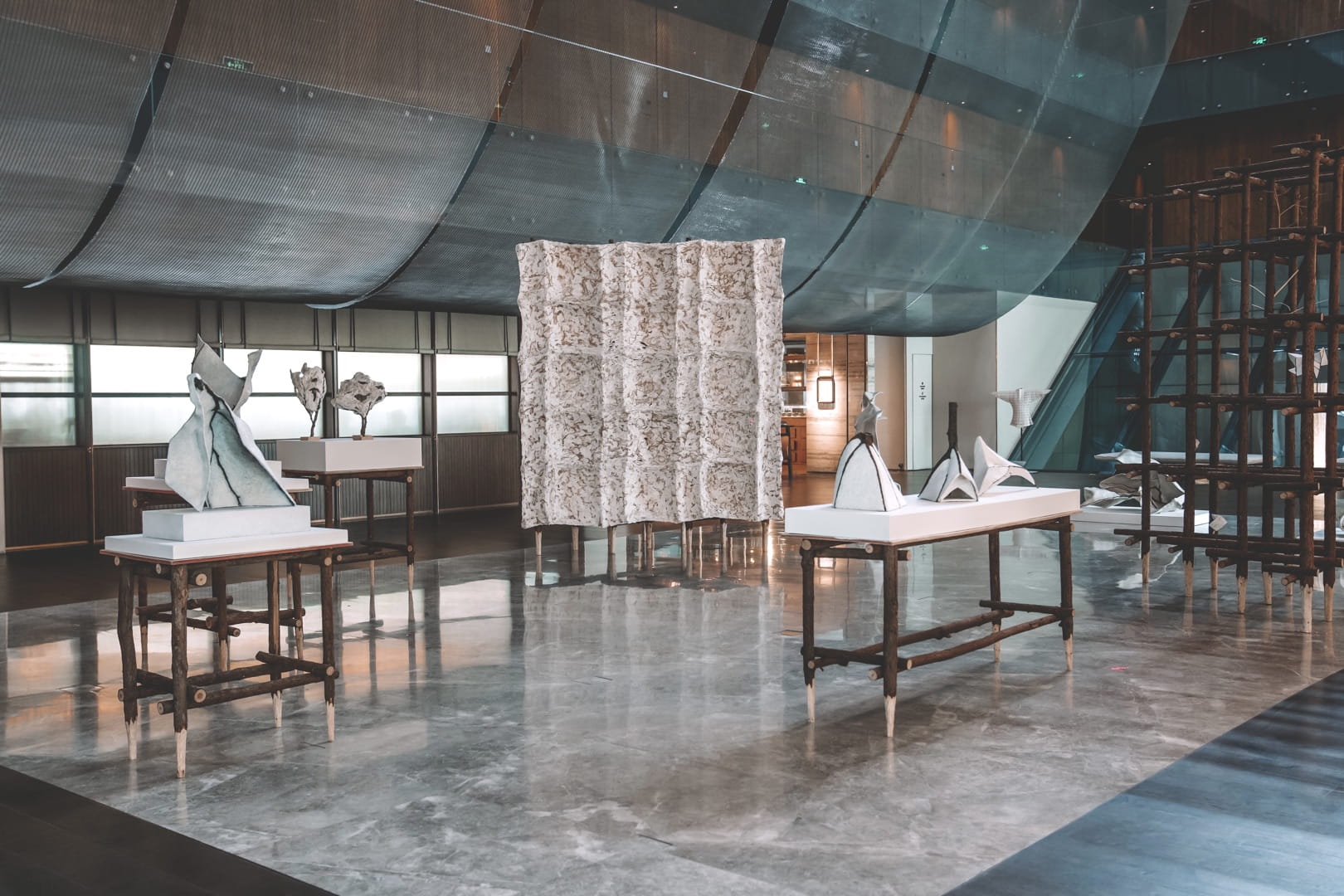 This Autumn, The Opposite House is pleased to present “Angular” by artist Kang Jing. The exhibition showcases sculptures that seem to grow and continue with the shape of a tree or a branch speaking the artist’s view of nowadays society.  Discover More 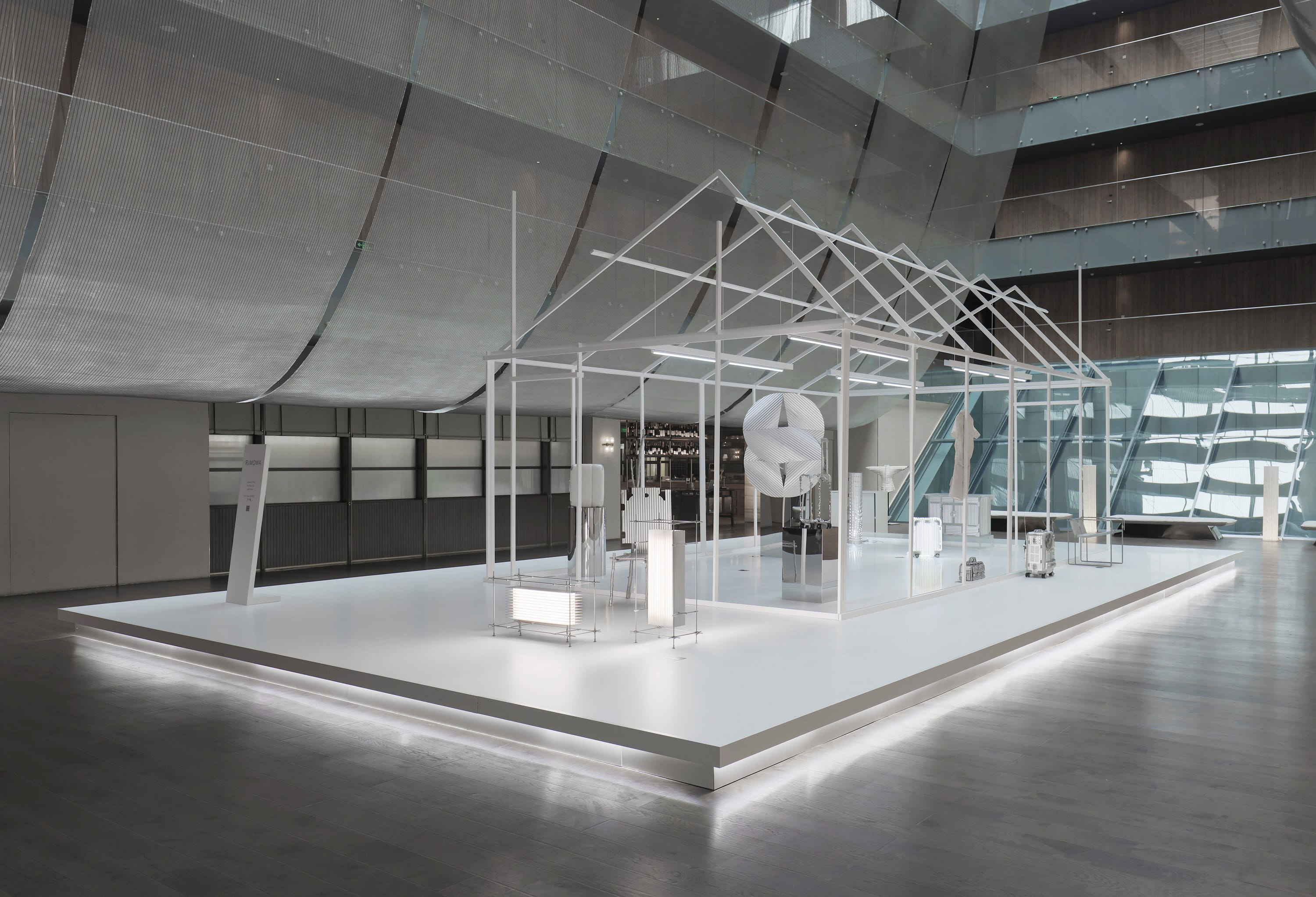 This July, The Opposite House is partnering with RIMOWA to reveal "As Seen By", an exhibition that accentuates the House’s own striking architecture and atmospheric artistry.  Discover More The Opposite House presents“Infinite & Inconceivable Lust” by Yvan Deng in Spring 2022. Discover More 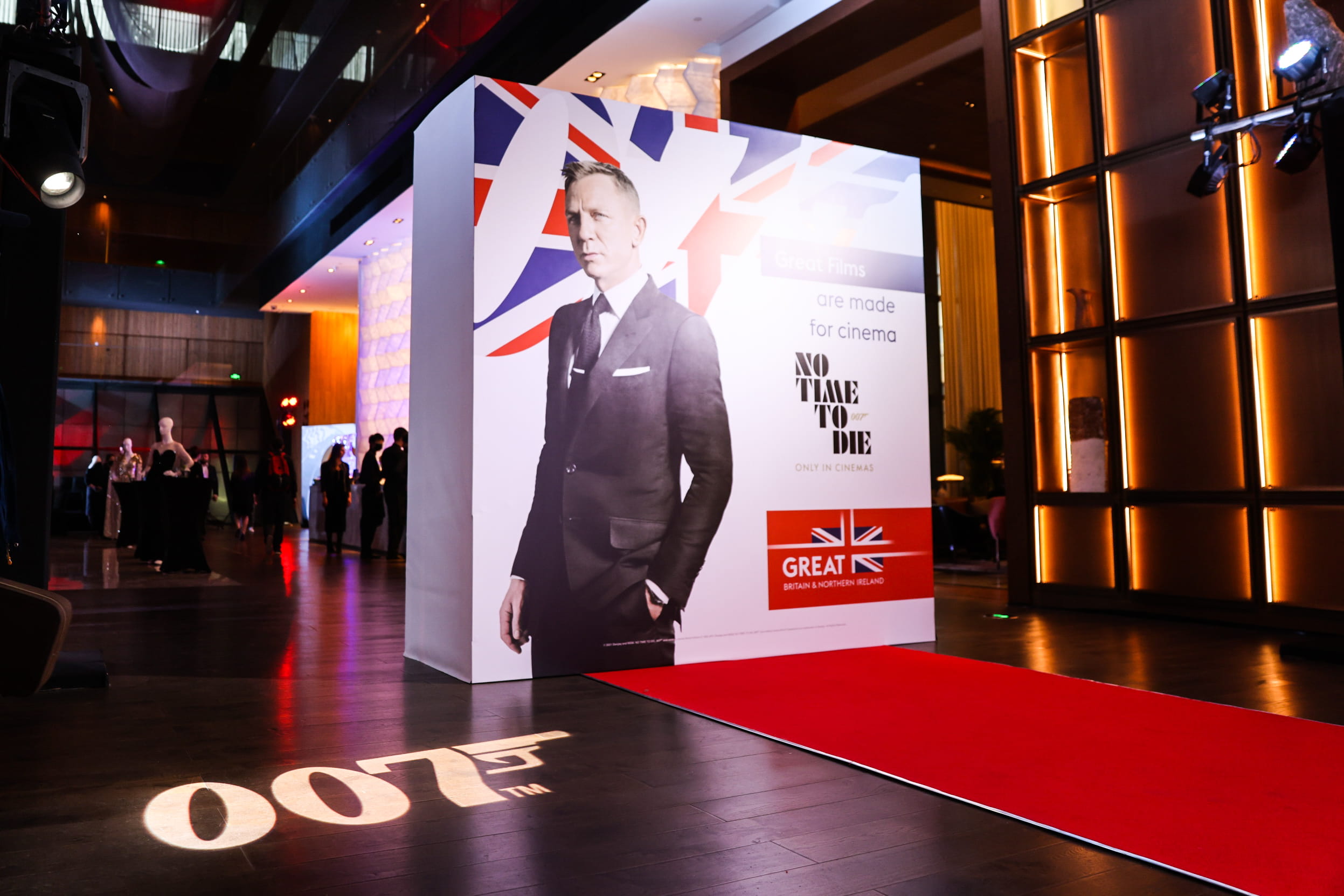 What a glamourous night at The House! Together with our partners hosted the new James Bond film: No Time to Die cocktail reception and pre-release screening. Discover More

Knock, knock, who's there? It's Halloween! The Opposite House Superfly is throwing "Super Villain" Halloween party. Discover More 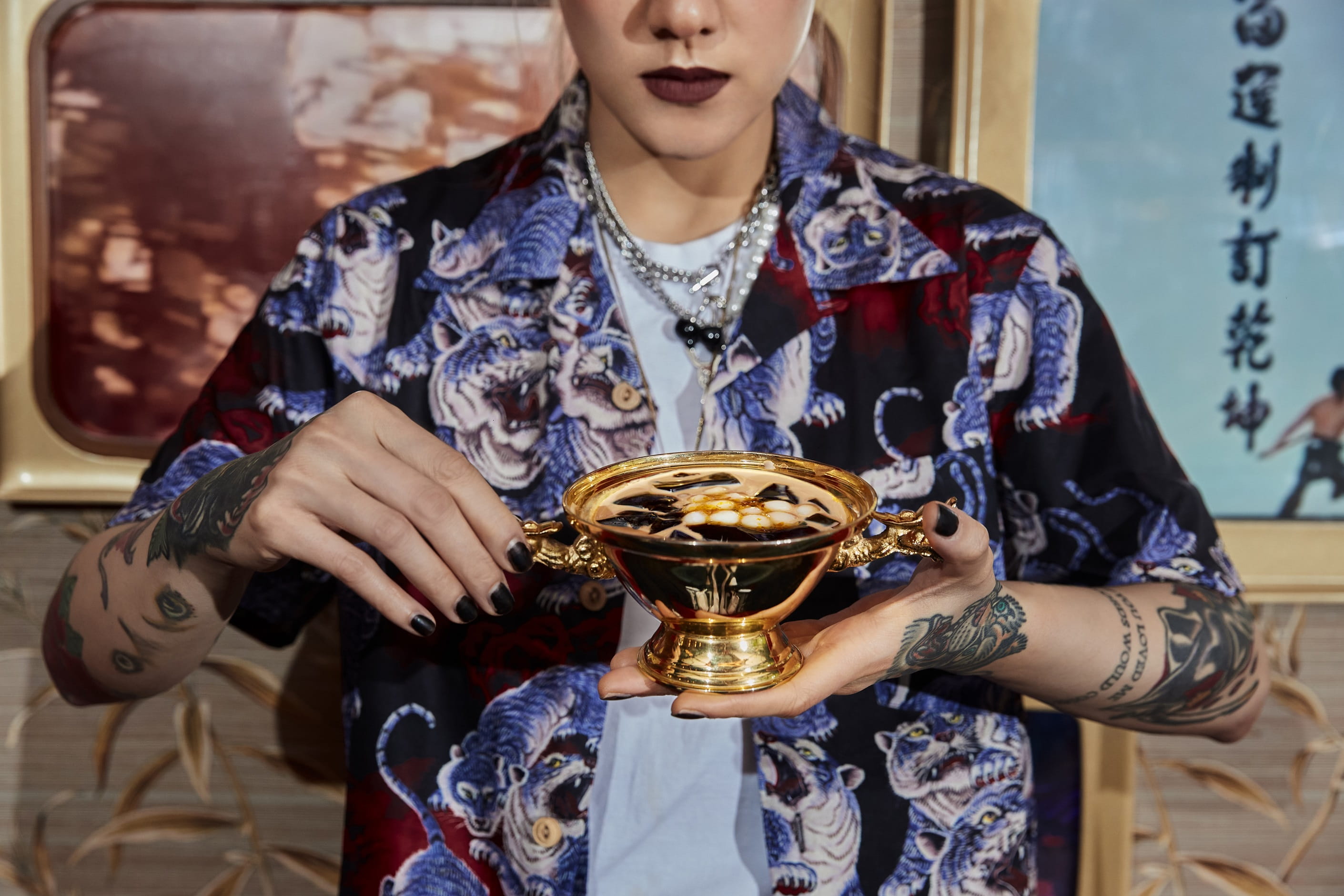 This spring, we are bringing more Sichuan must-eat classics to the table along with a few innovative twists in Superfly. Superfly is throwing Mala Disco on a Saturday night every month at 9pm. Get ready for upbeat playlists, awesome drinks and a night of fun vibes!
Discover More 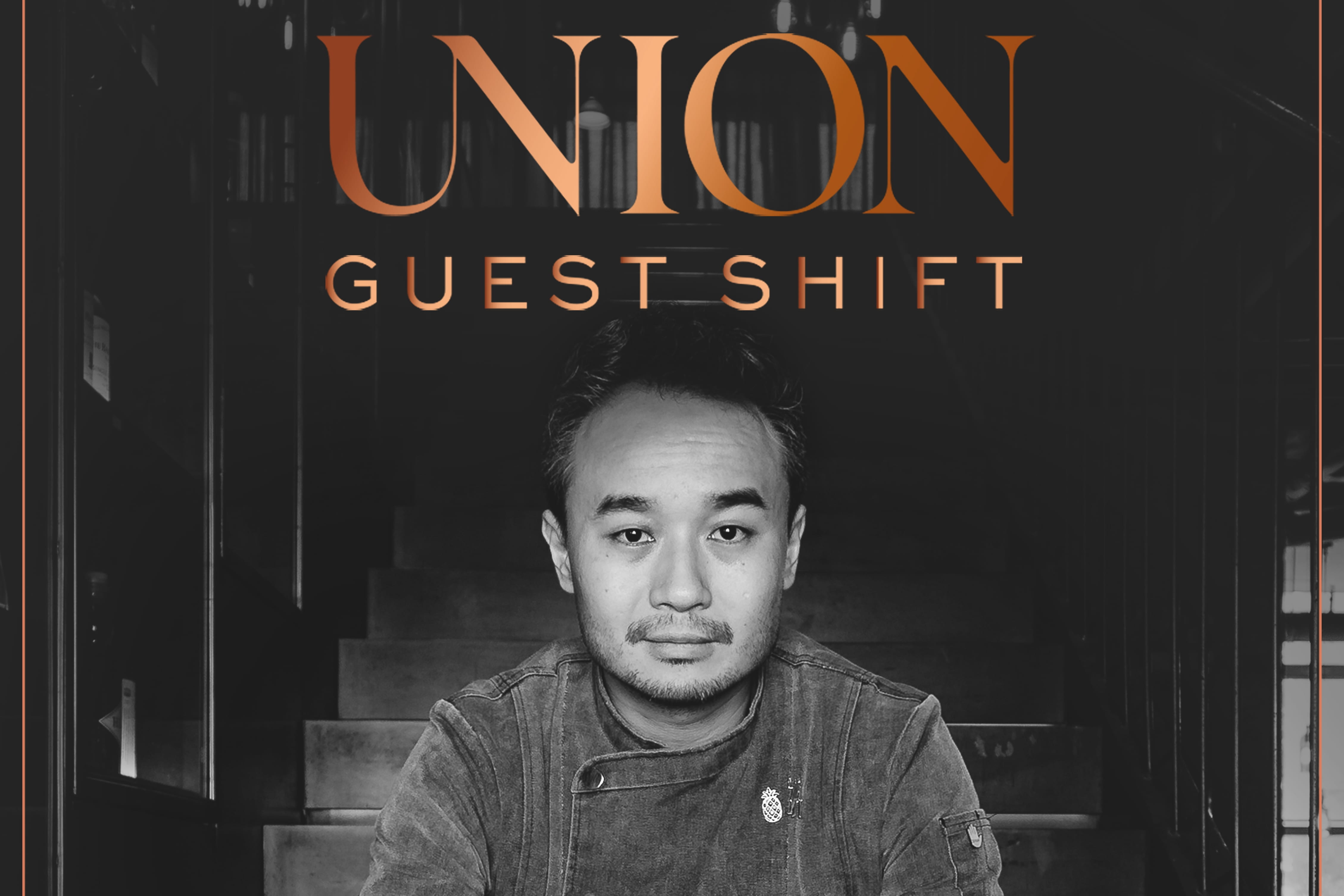 UNION: Sip In The Cities

We're welcoming back a familiar face - Ethan, the fresh and hot "Drink Awards Bartender of The Year 2020" returns with a series of silk road inspired cocktails. Discover More This time, we explore the 3 regions -Tibet, Greece and Japan where the ancient road of the North, South and Maritime passed by! Discover More 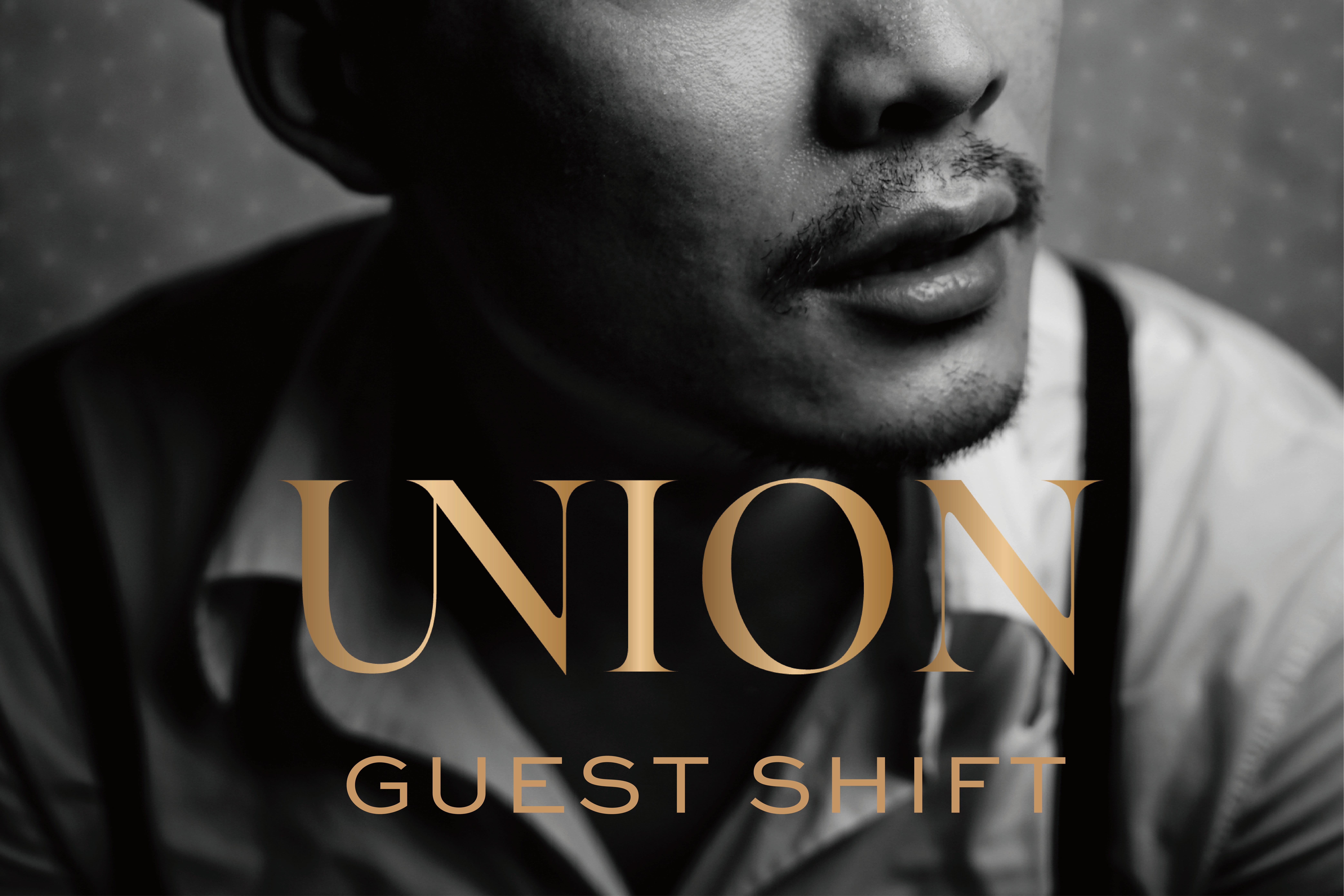 Union welcomes Eddy Yang, co-founder of Chameleon Shanghai on Thursday 25th March as he takes over the bar for a night of creative and tasty cocktails inspired by the Silk Raod. Discover More

FRASCA: The Coastal Flavour of Campania

This month, Frasca take your tastebud on a journey through Campania. 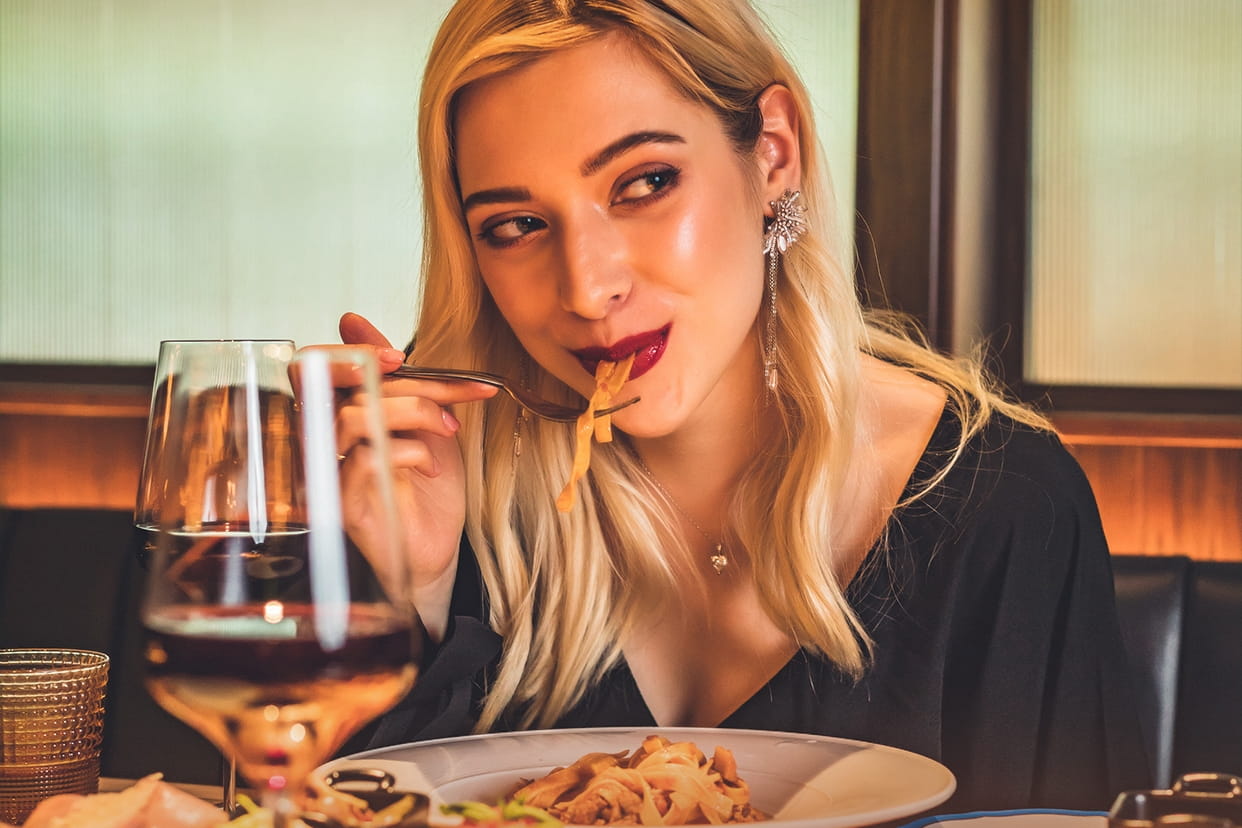 Pasta is the soul of Italian cuisine. Every Thursday, let's go crazy with PASTA FOLLIA! Choice of any 2 pasta and enjoy a bottle of Italian wine on the house at Frasca.

Come and join our wine social for 50% off, an everchanging selection of champagne and wine handpicked by our sommelier Ashley. Everyday from 11am – 10pm. 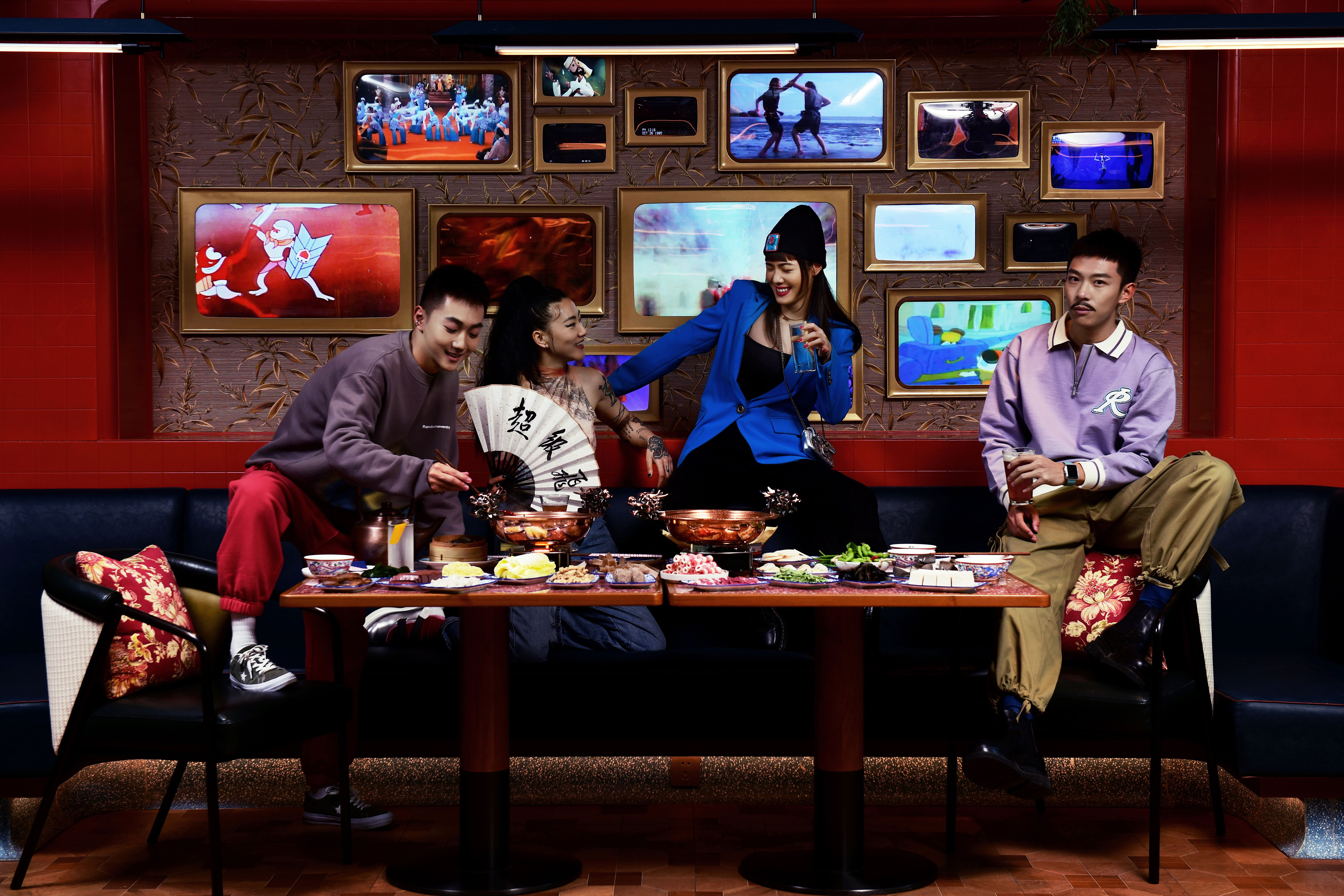 Dodge away the cold and strong Beijing wind at Superfly with a SMOKING HOT POT! 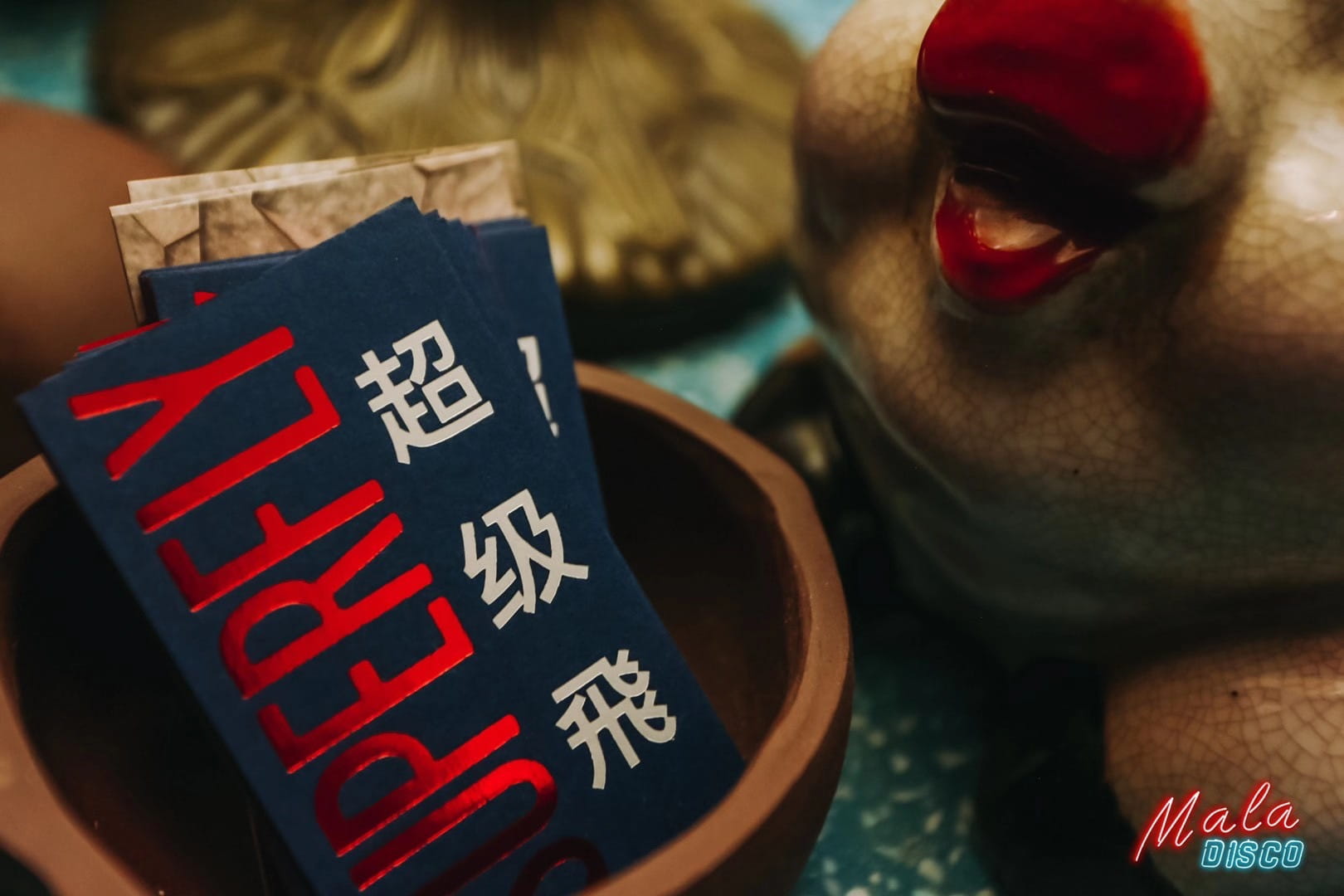 Our upcoming Mala Disco is inviting Matthew, the Bar Manager from Hakkasan Shanghai, he will be shaking Chinese centric cocktails. On the dance floor, Zeronce dance crew will be performing K-POP moves while DJ KIDS KING will be spinning all night. Don't miss out for a night of awesome cocktails, upbeat music and energetic vibes! From handmade pastries to Dou-zhi-er, embark on a food tour of one of Beijing’s most authentic local neighbourhoods and sample delicious street snacks. 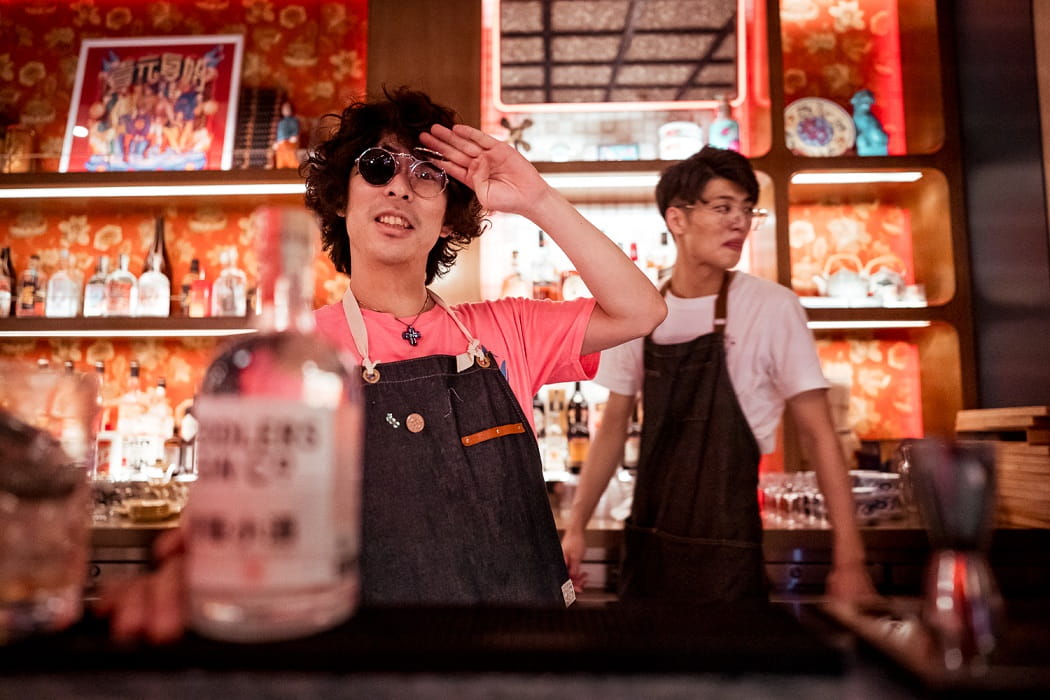 SUPERFLY is partnering up with PEDDLERS GIN to launch the first SUPERFLY Guest Shift, inviting Satoshithe Bar Manager of The Odd Couple in Shanghai,  ranked No, 38 of Asia's 50 best bars 2020.