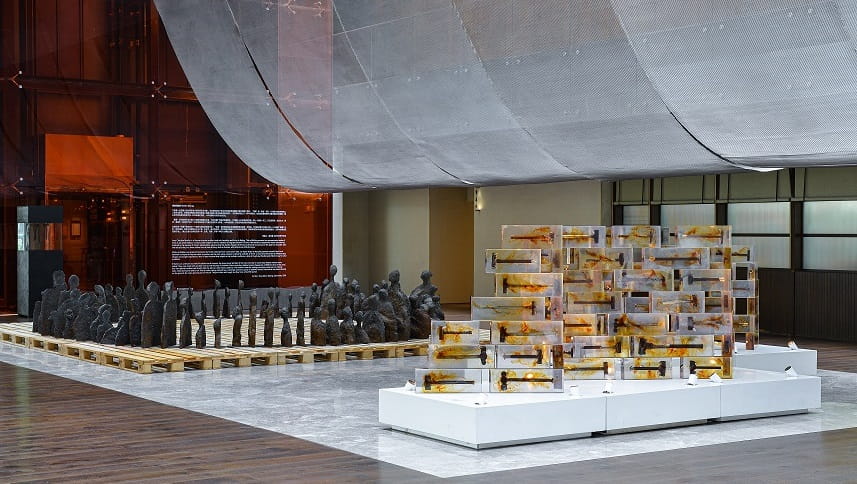 Arnd Christian Mueller is a German interior architect and artist working and living in Beijing.  This exhibition presents two representative series of Arnd as an artist: Malleus and Cast, both related to Arnd's attention to migrant workers in China. If the architect's experience makes him directly involved in the process of China's urbanization, experiencing the drastic changes of China's society and economy over the past two decades, then the role of artist, in a sense, allows him to look at things from a distance, with critical and reflective eyes.

Works of Malleus are made of hammers that Arnd collected from construction sites, car repair shops or recycling stations around China. Each hammer is unique as they are made by workers on the spot, using whatever material is available. In Arnd’s view, these hammers of different sizes, shapes and weights represent a kind of local wisdom that adapts to the limited conditions, a kind of rough, but flexible and effective way to solve problems. If there is an unknown but vivid life behind each hammer, the Anonymous Workers of the Cast series try to make these hidden workers more visible. They were made with workers from a small foundry in northern China. Arnd dug shallow human-shape pits of different sizes in the sand, and then poured molten steel directly into the pits to create these sculptures. The materials used for casting came from scrap iron, car wheels, nails, motorcycle parts and so on. Such a crude casting method has surprisingly created a group of powerful works.

These busts are placed directly on the ground, like crops growing out of the soil. They are silent and rough, but they have a heartfelt power. SUPERFLY is partnering up with PEDDLERS GIN to launch the first SUPERFLY Guest Shift, inviting Satoshithe Bar Manager of The Odd Couple in Shanghai,  ranked No, 38 of Asia's 50 best bars 2020.

From handmade pastries to Dou-zhi-er, embark on a food tour of one of Beijing’s most authentic local neighbourhoods and sample delicious street snacks.